Calculate the cost
Cost calculation in 3 steps
Send us a request
1
2
3
Choose your subject
Next
Next
Our manager will contact you soon to clarify the translation details and cost. 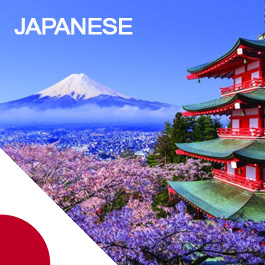 Japanese is one of the most mysterious languages on the planet. Scientists still cannot determine exactly where the Japanese language came from. According to some sources, one layer of the Japanese vocabulary is similar to the Altaic languages while another layer is similar to Austronesian languages.

The Japanese language is spoken by approximately 125 million people, and there are more than ten dialects in Japan, which arose due to the geographical features of the state.

The writing system in Japan consists of three parts, which are two alphabets created on the basis of hiragana and katakana - writing graphic forms - and kanji, which are hieroglyphs borrowed from China. Katakana is mostly used to spell foreign names, and hiragana is used to spell suffixes.

It is an interesting fact that nominal suffixes are added to all names in Japan that indicate a degree of kinship and social status. You should be careful when using a suffix, because by adding it to one's name, you can both express your respect and esteem, and offend your interlocutor.

Avesta Translation Agency in Yekaterinburg employs highly qualified staff who are ready to provide high-quality translation both from Japanese and from any other language into Japanese.

In addition, interpretation is also popular with enterprises and large companies in transactions.

Cost calculation in 3 steps
Send us a request
1
2
3
Choose your subject
Next
Next
Our manager will contact you soon to clarify the translation details and cost.